I thank the organizers of this blog for soliciting a foreign contribution. Unlike all previous contributors (as far as I can tell), I am based outside the country and the academic tradition in which I received my training. In 2017 it would be strange to exaggerate the significance of these differences within the broad field of socio-cultural anthropology. But sometimes they still strike me as significant. Reading Christian Weber’s article and the commentaries it has attracted was one of these occasions.

The commentaries are diverse but, perhaps because of the way cultural relativism was addressed in Christian Weber’s article and the explicit invitation to engage with this theme, the dominant view that emerges is one of anthropology as “the science of cultural difference”. Several posts adopt an explicitly dualist “them” and “us”, with invocations of “das Andere” and “das Fremde”. The discipline is presented as primarily a humanistic one, concerned to understand and respect cultural differences of all kinds. In this sense, the inversive Ethnologie of today is still very much the heir to the Herderian counter- Enlightenment.

But I was trained (or better, informally socialized, since there was little or no formal training at the time) to see Herderian Einfühlung with other cultures as just one part of the social anthropologist’s job. In addition to close-up observation and verstehen, it was important to proceed to explain something, if possible with precise and verifiable statements of causality. British social anthropology in its heyday rejected Boasian humanistic particularism and embraced a comparative social science that put social relations rather than culture at the centre of investigation. At any rate, this is what Jack Goody taught us in Cambridge in the 1970s.

I am well aware that the national traditions are more complicated than this. Some of Goody’s colleagues rejected the scientistic pretensions of Radcliffe-Brown in favour of French structuralism, or the thick description of local knowledge and aesthetics. The latter became indistinguishable from the dominant Geertzian school in North America. Goody’s successor in Cambridge was Ernest Gellner, a philosophical anthropologist strongly opposed to Geertzian relativism. In those decades one codeword for the relativist approach was hermeneutics. Nowadays it is usually ontology. But the recent “ontological turn” has many followers in Britain – it is certainly more popular than the militant anti-relativism of Gellner.

On the German side, the first anthropologists I became acquainted with in the 1990s were Georg Elwert and his students. These colleagues seem closer to British traditions (and in the German-speaking world to the sociologically-inflected anthropology of Richard Thurnwald in the first half of the last century) than to the dominant tone of this blog, which I would characterize (following Gellner) as hermeneutic.

In short, the national differences are far from black and white nowadays, and indeed they never were. Nevertheless it seems to me that, for good historical reasons, the Herderian tradition of celebrating cultural difference remains significantly stronger in Germany. This tradition has a strong claim on our attention today: in an age when Atlanticist ideologies are flattening the world more crudely than ever before, let us continue to emphasize the unique value of each and every noble Volksgeist! Contrary to Christian Weber’s implication, if there is any modernist alternative available to indigeneous peoples, it is more likely to be the Hayekian nightmare of free markets than a German-style welfare state. But in rejecting all variants of ignoble modernism, anthropologists should be wary of the darker side of the Herderian tradition, with its emotionalized conflation of people, nation and culture.

In the rest of this contribution I would like to supplement these very general remarks with more specific detail concerning persons and places (ethnographers feel more comfortable at the micro level). I do so uneasily, since I do not represent the noble variety of anthropologist who has field experience in an indigenous non-literate society. I have done most of my research in Eastern European villages, and my data never led me to invest heavily in notions of cultural difference. The supervisor of my dissertation, however, was Jack Goody, who spent over two years studying the complex mortuary rituals of the non-literate, non-centralised Lodagaa in what was then the British colony of the Gold Coast. In his dissertations (B.Litt Oxford 1952, Ph.D Cambridge 1954) there is no romanticizing or exotizing of these people: just a deep concern to grasp the “native point of view”, plus a rigorous analysis of social organization and an attempt to formulate comparative explanations (in particular with regard to mechanisms for the transmission of property as a causal variable).

Goody argued in later decades that anthropology should be redefined as comparative sociology. Postcolonial politics played some role in this stance, since the very name anthropology came to seem questionable in the wake of independence movements. Goody joined Nkrumah’s national party, observed how the construction of schools and roads transformed traditional societies, and kept in touch with LoDagaa friends who became geographically and socially mobile within a very short time. He also gave something back by working painstakingly for years with local people on the transcription and translation of their most important secret myth, the Bagre. This seems to me an exemplary anthropological career. Goody became a Professor of Social Anthropology, but he never sought to defend a disciplinary boundary. That this seems to matter more in Germany came across vividly in the contribution a few weeks ago by Gesa Lindemann, a sociologist who approves of anthropology because it provides a yardstick for her to appreciate the special features of the modern societies which are the object of study in her own discipline. Jack Goody rejects this implicit division of labour, since for him it makes no sense to distinguish two types of society. He also rejected the most powerful version of this dualism, the “hot” and “cold” societies distinguished by Claude Lévi- Strauss (Goody 1977). Human beings are basically the same everywhere; the nature of their groupings and the way they distinguish themselves from others vary according to many factors, including the modes of production, communication and coercion. Goody addressed many “cultural” topics in his rich oeuvre, but “culture” in the spirit of an enduring Volksgeist is alien to his approach.

For a second example let me pursue one of the cases mentioned by Christian Weber himself. I am slightly surprised that (apart from a brief postscript in the excellent contribution by Felix Girke) no one has so far picked up what for me is the journalist’s most telling illustration. The Mursi of southern Ethiopia are well known for the lip plates worn by their women. In order to wear them, a girl must endure a lot of pain in her childhood, but this is not long-term. These plates have become more prominent in recent decades, not least because of the interest that organized parties of tourists show in photographing them. Weber, citing the British anthropologist David Turton, claims that the size of plate has increased since the Omo Valley was opened to tourism. It seems that Mursi girls nowadays compete with each other for the click of the paying photographer. 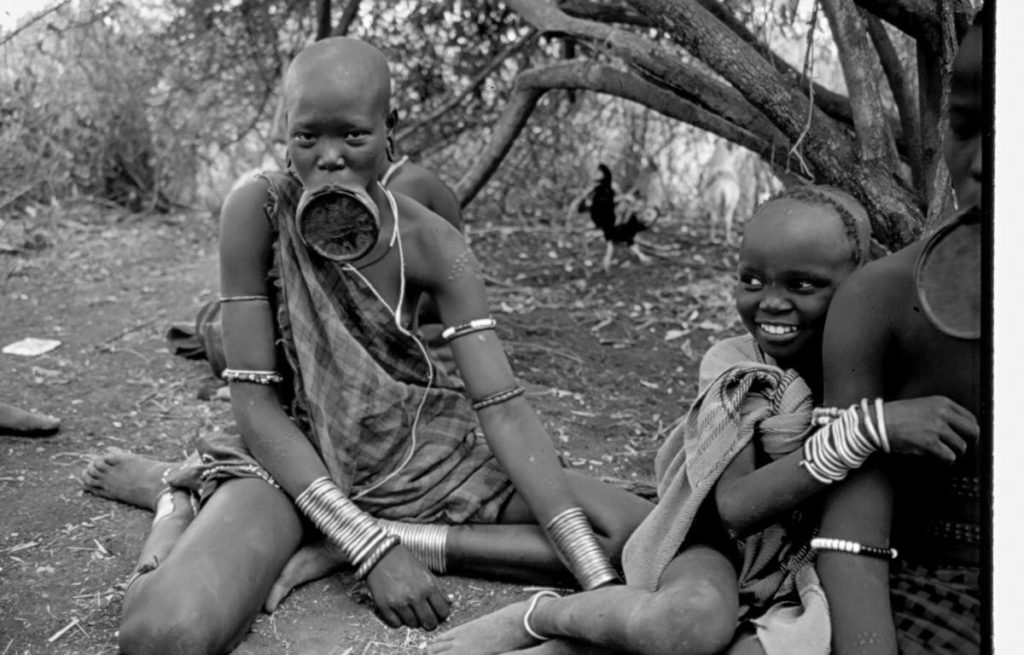 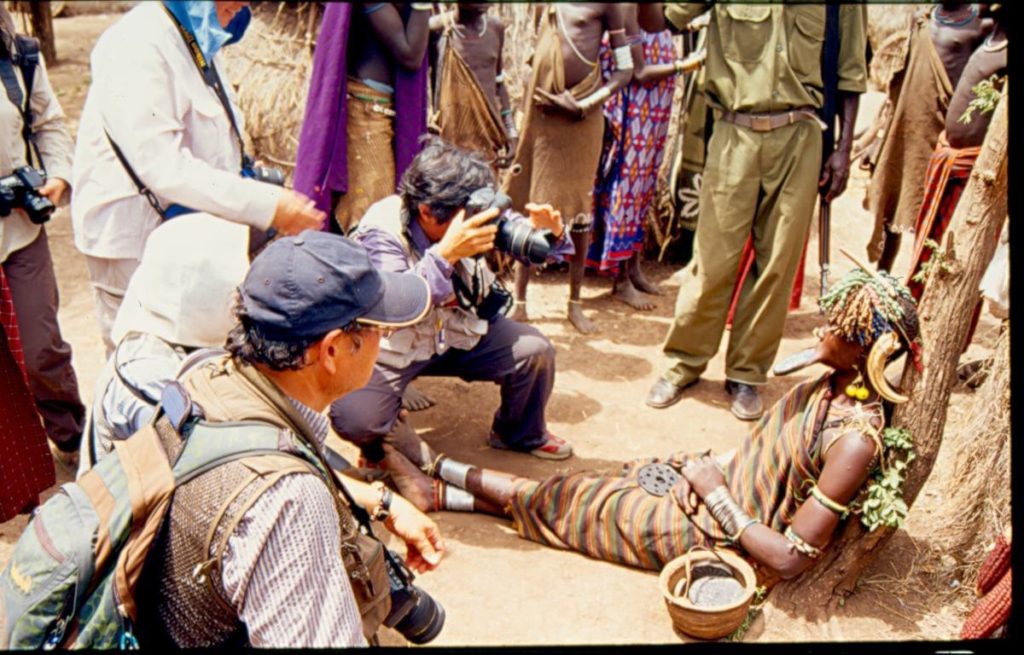 In fact, neither Turton nor anyone else has demonstrated a precise causal link between tourism and larger plates (and thus more pain in the long period of preparing the lip). The implication of competition is similarly unsupported. It is, however, clear that tourists have had a huge impact, and that in these new conditions a woman with a large plate is an “economic asset” (Turton 2004). Drawing on Susan Sontag’s theories of photography, Turton depicts these encounters as a form of theft, which is how they are experienced by Mursi themselves. But far from highlighting the value of cultural difference, Turton presents a sombre and yet reassuringly familiar picture of Mursi reactions to their new situation; they want money in order to be able to acquire goods, just like their powerful visitors. The British anthropologist draws comparisons with prostitution in the West and he notes that some of the money obtained from the tourists is spent on alcohol. These inter-cultural encounters are devoid of humanity. The theft of Mursi faces could hardly differ more from the assertive aesthetic of self-empowerment celebrated in Jimmy Nelson’s coffee table album (the original pretext for Weber’s article).

Christian Weber might have pushed his argument further. According to Turton, in the late twentieth century the Mursi were turning against this element in their traditions, partly due to heavy pressure from their state (especially when it was in the hands of Marxist- Leninist modernizers) and partly because they themselves had become conscious of its “backward” character. Lip plates have vanished among other peoples of the region for similar reasons. It is the opening to tourism that has promoted an efflorescence of this custom among the Mursi, on a demeaning basis through which local girls are induced to act as Hayekian market agents, inflicting more pain on themselves in order to compete effectively and maximize expected income streams. For me, circumstances like this drive home the limitations of a relativist perspective in the contemporary world. No indigenous peoples live in conditions in which they alone are free to decide their future. If anthropologists do not wish to be seen as condoning this savage commoditization, if they want their voices to count in the present, rather than be dismissed as antiquarian romantics, then it is not enough to celebrate the differences of a pristine past. To the extent that he points in this direction of critique, Weber’s article should be welcomed. Of course, this is exactly what social anthropologists like Turton have been doing for many decades. When the habits of the Mursi are distorted by the outsiders who take photographs, leading to the accentuation of lip plates as the prime symbol of something called their culture, analysis of the social and political relations behind these mechanisms is a prime task for the anthropologist. This analysis belongs in mainstream disciplinary journals and should not be marginalized in specialized journals for “critical tourism studies”.

If Christian Weber’s article serves to generate debate in German university seminars for another year or two, I suggest that David Turton’s concise and concrete paper be adopted to complement the more sophisticated intellectual responses in this blog. I also recommend Tamás Régi’s more recent analyses of how tourism continues to develop as a major “ecological” resource in the lower Omo Valley, with support from the Mursi themselves (e.g. Régi 2014); and finally the web resource established by Turton, Mursi Online: http://www.mursi.org/

Depending on the level of the seminar, it might be worth introducing the voice of Ernest Gellner (e.g. Gellner 1985). Let me reassure readers that even this arch-critic of philosophical relativism expected his students to adhere to Boasian-Malinowskian standards of field research. They had to understand the local categories as thoroughly as possible. For Gellner, trained originally in philosophy, it was crucial to take a further step and assert that, at the end of the day, Western science (including social science), was cognitively superior (NB not morally superior) to that of the other societies “we” studied.

For Goody (an anthropologist’s anthropologist in the sense that he made many technical contributions to kinship studies), it was more important to emphasize the cognitive similarities of all human beings, and ultimately to merge anthropology into a comprehensive historical social science. My Einfühlung with both Goody and Gellner is doubtless influenced by my personal relations with them. In the context of this blog (surely our least noble academic genre), I confess also to a little sneaking sympathy with the ignoble journalist, despite the weight of legitimate criticism in earlier contributions.

Perhaps this makes me an ignoble anthropologist. But I can’t change that; it’s due to the intellectual culture in which I was raised.