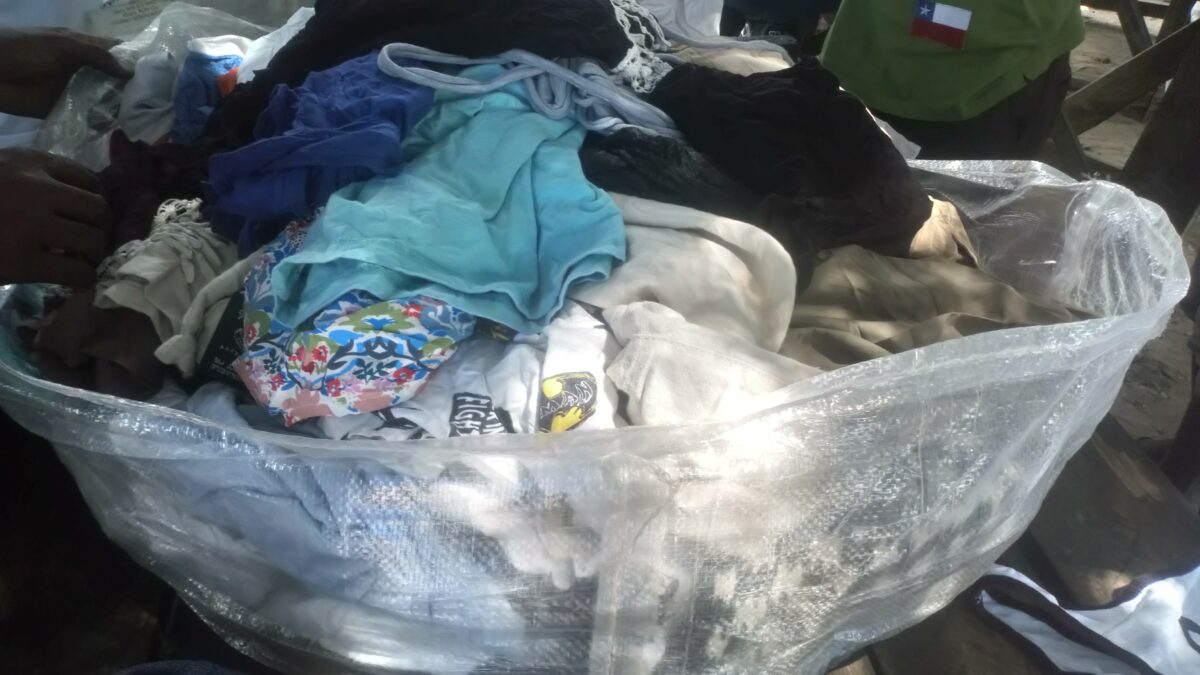 The millions of pieces of second-hand clothes (mitumba) that are sold in Tanzania every year are imported from other countries. Previous owners saw little value in the clothes for themselves anymore and decided to donate them to a charitable organization or even to dispose of them as waste. Perhaps because of these origins, foreign observers often assume African consumers only purchase second-hand clothing because they simply lack the money to buy new clothes. Scholars Brooks and Simons (2012, 1285), who studied the second-hand clothing trade, for instance write that “it is still new clothes rather than the discarded trends from the global North to which people aspire. Impoverished consumers of the second-hand clothing trade are not materially connected to a modern life.” Their understanding is based on the assumption that it is natural for people to prefer new clothes over second-hand goods. But interviews I carried out with consumers in Tanzania showed that they do not necessarily aspire to buy new clothes, nor are all of them “impoverished”.

In April 2020, I interviewed five men and six women, all living in a secondary town at Tanzania’s southern coast, about their preferences and purchasing habits when it comes to clothing. These consumers had varying levels of income, ranging from virtually nothing to a doctor’s salary. All but one were purchasing mitumba from time to time, and the remaining one was a young woman who did not yet buy all her clothes herself and who was sometimes given second-hand clothes by her mother. One middle-class female consumer summarized the common reasons to buy second-hand clothing, which were also echoed in the other interviews: 1. everyone can afford these clothes (unlike for instance tailor-made clothes, which are somewhat more expensive); 2. if you are lucky, they are of good quality; and 3. there are no other people wearing the same outfit, as is often the case with the new clothes available in shops in secondary towns, which are imported from Asian countries in bulk. One interviewee remarked about these cheap new clothes: “it is not clear anymore who is looking good”, as the same outfit is worn by many people. In short, mitumba are often preferred because they are affordable, mostly of good quality, and unique.

In fact, the last two factors might even be more important than the price. Despite the relative affordability of the clothing, it are not the poorest consumers who regularly buy mitumba. They simply lack the money to do so and primarily depend on gifts or left-overs from family and friends instead. They are only occasionally able to buy a piece of clothing themselves. The woman I stayed with during previous stays told me in 2020 that she had not bought a piece of second-hand clothing since we together bought a skirt for me from a pointer who was passing her house in 2012 (a skirt I am still wearing from time to time, indicating there is some truth in the claims about the good quality of such clothing). Wealthier consumers, in contrast, buy several pieces of clothing per month and have a trader looking out for second-hand pieces they could be interested in. This saves them the time of looking for suitable clothing, although they sometimes also purchase a piece spontaneously. A shop-owner said: “If [a trader] passes by my shop and something appeals to me, I buy it.” Other interviewees also used the word “to appeal to me” (kuninogea) when explaining how they decide on their purchases. Such customers look for originality and style in a piece of clothing, and mitumba can often offer that best compared to other types of clothing available. That the second-hand clothes are also mostly (but not always) cheaper is for some decisive, but for others just an additional advantage. The owner of a bus company explained that he could easily afford new clothes, shoes, and bags available in the shops, but they are simply not of good material: “They wear out easily”.

This is something all consumers, regardless of income, agreed on: second-hand clothes are imara – robust, and zinadumu – they last, at least if you select a good piece. The downside for some is that consumers have to put more effort in selecting good pieces than when purchasing new clothes. For instance, one interviewee pointed out mitumba can also deceive: a piece might still look good but then still rip after a few days of wearing. Another interviewee explained it is important to wash these clothes well before wearing them because they have a particular smell. Indeed, not all consumers prefer mitumba, at least not for all of their clothing needs. Most interviewees denied buying second-hand underwear. Some explained they buy certain types of clothing, such as shoes or dresses, new because they have an unusual size that is not available in mitumba. But none of the consumers I interviewed had principal objections to purchasing mitumba, especially because of the lack of locally available alternatives that meet the same standards.

Banik, Dan, and Kaja Elise Gresko. 2020. ‘Why Is Used Clothing Popular across Africa? We Found out in Malawi’. The Conversation. 21 April 2020. https://theconversation.com/why-is-used-clothing-popular-across-africa-we-found-out-in-malawi-136438.