Please allow me to begin with a Latourian digression to frame what I want to say about the current debates over ethnographic museums. “What has become of critique,” Bruno Latour asked almost fifteen years ago, “when an editorial in the New York Times contains the following quote?

Most scientists believe that [global] warming is caused largely by man-made pollutants that require strict regulation. Mr. Luntz [a Republican strategist] seems to acknowledge as much when he says that “the scientific debate is closing against us.” His advice, however, is to emphasize that the evidence is not complete.

“Should the public come to believe that the scientific issues are settled,” he writes, “their views about global warming will change accordingly. Therefore, you need to continue to make the lack of scientific certainty a primary issue.”

Such “artificially maintained scientific controversy,” in this case to support a “brownlash” or anti-environmentalist stance, prompted Latour to offer the following thoughts:

Do you see why I am worried? I myself have spent some time in the past trying to show “‘the lack of scientific certainty’” inherent in the construction of facts. I too made it a “‘primary issue.’” But I did not exactly aim at fooling the public by obscuring the certainty of a closed argument—or did I? After all, I have been accused of just that sin. Still, I’d like to believe that, on the contrary, I intended to emancipate the public from prematurely naturalized objectified facts. Was I foolishly mistaken? Have things changed so fast?

At various points over the last few months, I have been reminded of the notion of an artificially maintained (scientific) controversy. Most, if not all, readers are aware of the Trump administration’s attitude towards climate change, while the United States has been investing billions in research over decades that has produced overwhelming evidence for the impact of human action on global warming. The controversy should be over, and the debate should focus on ‘how on earth’ to face the inevitable consequences. Yet, nearly fifteen years after Latour’s words were published, “dangerous extremists are [still] using the very same argument of social construction to destroy hard-won evidence that could save our lives.” It seems that in a manner of “instant revisionism,”[ii] rigorously generated insights can be overturned and controversies prolonged for the sake of ideological posturing and political bickering. Whatever efforts of such denial continue to be made, however, global warming certainly will not be tamed by ideological hiding but remain a reality to be reckoned with.

It might be a far stretch for the reader, but this sense of an artificially maintained controversy is also what comes to my mind when following the current debates, or rather conflicts, around ethnographic museums, especially in Germany. Promising concepts and terms such as ‘multiperspectivity’, ‘shared heritage’ and ‘source communities’ circulate in nearly each museum-related document, grant application, conference program, professional publication, policy statement and press release. Yet, does their critical potential really lead to epistemic, political and structural reconfigurations? Or can they rather be unmasked as insidious acts of what Friedrich von Bose calls “strategic reflexivity,” that is, the co-opting of (post)colonial critique for the sake of stabilizing the (neo)colonial status quo?[iii] What has become of the “museum spirit”, to slightly amend Latour’s “critical spirit”,[iv] when this institution tends to oscillate between “colonial aphasia,”[v] or silencing, and an overemphasis on peaceful and legal acquisitions and transactions, which by and large were (and are) still manifestations of an underlying violent and unethical “situation coloniale”?[vi] The recently posed question (framed from within the Humboldt Forum in possessive terms!),“Wem gehört die Kunst der Kolonialzeit?”,[vii] could thus only be answered with “Runter vom Ross, Herr Parzinger!”[viii] by (post)colonial critics calling for the restitution of human remains and colonial loot from outside the Humboldt Forum and across a seemingly unbridgeable divide. Is this really the current state of the debate or controversy? To be sure, once again, (post)colonial realities certainly will not be disguised by artificially maintaining their denial.Has the ethnographic museum, an institution initially founded to tackle big ideas and questions – however suspicious or even perverse some of them appear to us today –  “run out of steam”, to borrow Latour’s words once again?

In a talk given at LMU Munich, in late 2016, the same Latour laid out the trajectory “from the anthropocene to the new climatic regime”. While doing so, he took issue with the concepts of the globe and globalization, and argued that humanity needs to rethink the Earth as a living system, or “Gaia”, assuming center stage rather than being relegated to the background as “Nature”. To achieve this, Latour further argued, knowledge needs to be harvested from across the disciplines. When probed about a concrete pathway, he referred to the cosmologies once collected and stored in archival and museum collections, in the name of anthropology, to salvage a past doomed to disappear. This treasure trove, Latour suggested, should be revisited to reimagine humanity’s multiple potential futures.

These are the big questions and ideas of the 21st century to be tackled by ethnographic museums. For this to be made possible, however, these institutions urgently need epistemic assistance. So-called ethnographic objects in European museums remain largely alienated from the distant cultural environments of their Indigenous producers and sources of knowledge. The core of the widely observable conflicts between European institutions and Indigenous people is therefore even deeper, and, apart from the (largely-justified) claims for moral redress, political concessions and legal reparations that tend to dominate museological debates—as witnessed once again in the latest round of the seemingly never-ending battle sparring Humboldt Forum and No Humboldt 21!—I see the problem as essentially epistemic and methodological. That is, the desperate grip on Deutungsmacht, for example, which continues to paralyze anthropological and museological discussions, is often not only politically and morally reprehensible but methodologically flawed. In other words, the debate and controversy needs to move from the (important) political and ethical implications to the underlying (and even more important) Indigenous ways of knowing and being through which political and ethical issues may arise, and through which humanity’s multiple potential futures can be reimagined.[ix] What happens, then, when archival and museum collections are used in the present and mobilized towards the future? And what happens if we approach museums, not only as mechanisms and structures of collecting, ordering and governing, but also as dynamic-contingent processes, heterotopian spaces, and living resources for creative interventions and utopian (re)imaginations?

Elian Hooper-Greenhill speculated nearly twenty years ago that the intellectual development of what she called the “post-museum” was likely to take place outside the “European centers which witnessed the birth of the modernist museum”.[x] I strongly believe that she was right, and a glance across the world should offer us some much-needed guidance. In Aotearoa New Zealand, the bilingual titles of museums reflect the Indigenous Māori view of the world. Their Māori names liken museums to hills, caves, store houses and, commonly, to canoes (waka), either literally or figuratively through the image of a treasure box or carved vessel containing precious objects.[xi] In other contexts, the word ‘waka’ can refer to the crews of, and those descended from, ancestral voyaging canoes, a flock of birds in flight, and today to cars and other forms of transport. Nearly one hundred years ago Māori leaders used the same imagery for museum anthropology—the seal of the Board of Maori Ethnological Research showed a waka under sail. They urged their people to load on board this waka the “precious freight [heritage]” of their ancestors, so that it could be preserved and disseminated “for all the world to see”.[xii] (Figure 1) These images of mobility are a striking contrast to the European history of museums, in which institutions are often seen as static mausoleums devoted to the preservation of the past, as evidenced in Michel Foucault’s notion of heterotopias, in which he contrasts the “museum” as an “immobile place” with the “ship” as “the greatest reserve of the imagination”.[xiii] It is possible, however, to rethink the concept of the museum as ship, mobilizing it as a reservoir of the imagination, and explore the ways in which the associated concept of curation can be turned around to face the future, as the crew of the waka navigates the ocean before them.[xiv] Ethnographic museums in Germany and wider Europe should follow in the slipstream to avoid really running “out of steam”… 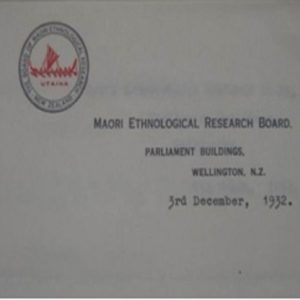 Figure 1. The seal of the Board of Maori Ethnological Research, Wellington, showing an ocean going waka (canoe) under sail. This seal was used on all Board correspondence from it’s establishment in 1923. Courtesy author. For an explanation of the image, see: A. T. Ngata, ‘He ‘Whakamarama/Preface,’ in Nga Moteatea: He MaramaraRere No Nga Waka Maha. He Mea Kohikohi Na A.T. Ngata/The Songs: Scattered Pieces from Many Canoe Areas Collected by A.T. Ngata. Part I. edited by A.T. Ngata, translated by Pei TeHurinui Jones (Wellington: The Polynesian Society 1959/1928), p. xiv.

Philipp Schorch is Head of Research, State Ethnographic Collections Saxony, Germany, and Honorary Fellow at the Alfred Deakin Institute for Citizenship and Globalisation, Deakin University, Australia. Philipp is co-editor of Transpacific Americas: Encounters and Engagements between the Americas and the South Pacific (Routledge, 2016) and Curatopia: Museums and the Future of Curatorship (Manchester University Press, 2018).

Please allow me to begin with a Latourian digression to frame what I want to say about the current debates over ethnographic museums. “What has become of critique,” Bruno Latour asked almost fifteen years ago, “when an editorial in the New York Times contains the following quote?

Most scientists believe that [global] warming is caused largely by man-made pollutants that require strict regulation. Mr. Luntz [a Republican strategist] seems to acknowledge as much when he says that “the scientific debate is closing against us.” His advice, however, is to emphasize that the evidence is not complete.