This contribution is available in: Deutsch

7 June 2018: In the Schlüter courtyard of the German Historical Museum (DHM), I am waiting for interdisciplinary symposium “The Stone Cross from Cape Cross – Colonial Objects and Historical Justice,” to begin. I start to imagine what would happen if N’Jadaka, one of the main protagonists of the  Afrofuturist Hollywood blockbuster, ‘Black Panther’ (2018), climbed through the glass dome of the courtyard. The target of his operation: the return of the Cape Cross pillar.[1] After the (fictitious) repatriation of the Vibranium Axe, from the (fictional) “British Museum” (jhuexhibtionist 2018) to Wakanda, this would be his second ‘illegal’ repatriation. On the one hand, I am amused by the idea of looking into the faces of the 350 national and international guests (DHM 2018), whose expressions range from shocked to horrified. On the other hand, considering the symposium’s program, I start thinking about possibilities for decolonizing national and international law. 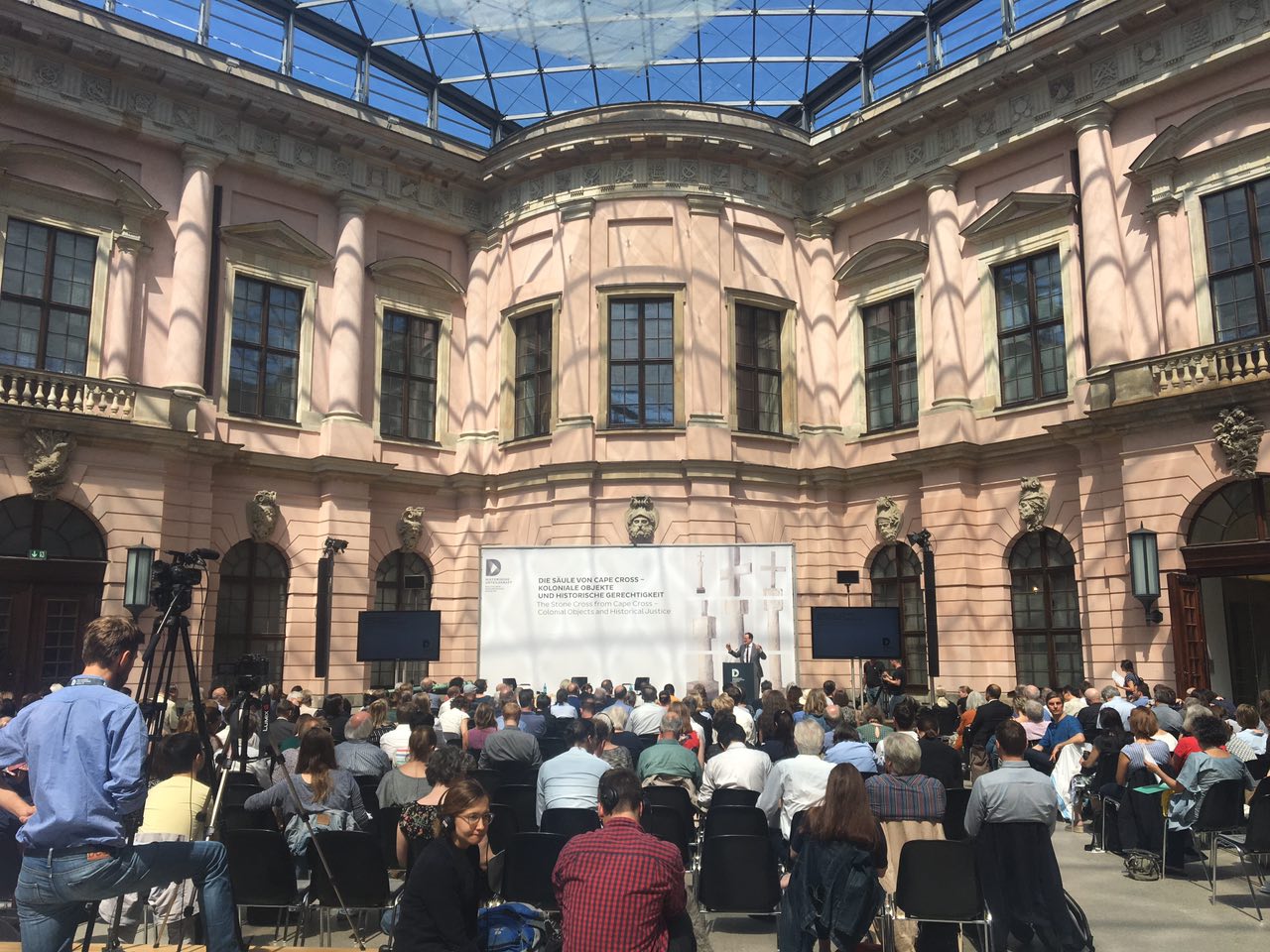 The symposium was opened by Raphael Gross (President of the German Historical Museum [DHM]), Monika Grütters (German Culture Minister), and Andreas Guibeb (Namibian Ambassador to Germany). The welcome addresses by Gross, Grütters, and Guibeb focused on debates concerning the return of colonial objects from European anthropological museums. All three speakers emphasized the necessity of deepening knowledge and discourse about German colonialism in German public awareness, as well. The opening speakers also agreed that discussion about the Cape Cross pillar not only makes it possible to ask what historical justice is and can be but also carries the potential for real political debate about implementing historical justice. However, the contributions by Gross and Grütters differed from Guibeb’s in that Gross and Grütters implicitly wanted to expand German remembrance political discourse by including remembrance and “reclamation” of German colonialism, thus treating colonialism as something of the past. In contrast, Guibeb’s contribution made it clear that the debate could not be conducted only in relation to the past, but that it would also concern the present and the future. In addition to many other exciting contributions on questions of justice in time (Lukas H. Meyer), on the controversial equestrian monument in Windhoek (Goodman Gwasira), and on questions about the connection between museum objects, memory, and identity in Namibia (Jeremy Silvester), it was above all the lectures on “The Column of Cape Cross and International Law” (Sophie Schönberger), “Daniel Kariko’s Resistance in Cape Cross” (Dag Henrichsen), as well as comments by Rwandan journalist, Arelette Ndakozy, that contested the symbolic-political euphoria created by the opening speakers.

Dag Henrichsen criticized the primarily symbolic-political nature of the event, which, through the pillar of Cape Cross, focused on a symbol of colonial claims to power, rather than devoting itself to objects of greater significance for the local culture of remembrance. As an example, he mentioned the ancestral staffs of the Herrero, which are still on display in Dresden (see also Habermalz 2018). In spite of his criticism regarding the choice of object at the center of the conference, Henrichsen agreed with Ralph Gross in his point that the meeting should serve both as a point of departure and as a baseline for further debates on the restitution of colonial objects, while also dealing with historical justice. However, I believe that the debate cannot stagnate at this point. Rather, in the sense of transgenerational (Meyer 2003 and 2005) and decolonial historical justice, it must leave the walls of anthropological museums and sociocultural anthropology departments, and enter, for example, institutes for law and legal studies:

7 June 2018: Sophie Schönberger is an interesting speaker; with her contribution “The Pillar of Cape Cross and International Law,” she addresses a level of debate to which I have yet to give much thought. Surprised by the subtly articulated post-colonial attitude of Sophie Schönberger, I begin to wonder, what about the political force of the repatriation debate from a legal perspective? After all, I just heard Sophie Schönberger say that changing legal frameworks to simplify the return of colonial objects is also a political decision…

back to the Cape Cross pillar.

With regard to the pillar of Cape Cross, Schönberger not only explained the complicated legal framework of repatriation in general but also placed special emphasis on the complex legal situation for the repatriation of colonial objects within a context of so-called shared heritage. Furthermore, Schönberger made it clear that a distinction must be made in the debate between legal and moral justice, referring to the Eurocentric Western legal categories such as property law: “The indigenous groups the artefacts were taken from did not always have a tradition of property rights that corresponds with Western legal ideas” (Schönberger 2016: 47). It is precisely on these Western legal ideas, among others, that the 1972 UNESCO World Heritage Convention is based, which is intended to help nation states protect cultural heritage within their national borders (van Beurden 2018; Schönberger 2016: 46).

Considering a legal answer to the moral dilemma in which the actors of repatriation debates are involved, Schönberger points to two further complexities that are interwoven with the Western idea of the legal system. On the one hand, the factor of time is a core issue in the debates, as the 1972 UNESCO World Heritage Convention is only applicable to objects and artifacts that were acquired after 2007, the year in which the German government signed the Convention. Although there have been some transformations in international law, the core problem remains that the laws are not retrospectively applicable, as the example of Germany shows. On the other hand, proof of possession and the associated idea of ownership are incommensurable with the often collectively codified ownership concepts of indigenous groups (Schönberger 2016: 46).

The discussion that followed from Sophie Schönberger’s and Lukas H. Meyer’s lectures revealed that in debates about repatriation of colonial objects, it is not only the objects themselves that are at the center of proceedings and negotiations. Rather, debates on the repatriation of colonial objects and the role of anthropological museums – “as locations for the formation of participatory citizenship” (Juneja 2018) – are sometimes explicitly, sometimes implicitly, negotiated on grounds of national identities that are tied to questions of the cultural and financial value of objects (van Beurden 2018). In turn, concepts of citizenship and nationality are concepts that place individuals, conceived as citizens within a Western legal framework, in simultaneous legal relation to one another and to the territorially defined nation state. In this sense, legally governed relationships hold between individuals, between individuals and the state, and among states. However, in this national and international legal thinking, juridical relations between states and indigenous groups (Nama and Herero in Namibia, for example), whether within a state and across state borders, are not taken into account (Schönberger 2016: 45). 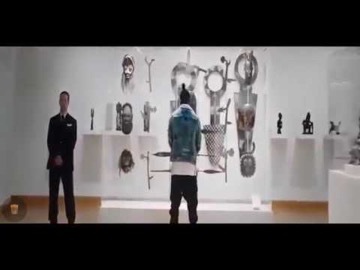 Sophie Schönberger’s legal perspective, but also popular culture adaptations such as the museum scene in the feature film “Black Panther” (2018), do not only highlight incommensurable notions of property with regard to colonial objects and artifacts. They also emphasize that questions of historical justice should neither end with the recognition and reclamation of past injustices nor be banished to the level of cultural politics alone. Rather, what is required is a decolonial emancipatory-speculative examination of the theoretical and practical (im)possibilities of establishing a decolonial agreement. Namely, an agreement that would grant formerly colonized territories a legal claim to the return of colonial objects and artefacts without reference to problems of time and property rights.

In the aftermath of this exciting and insightful symposium, it seems to me that the actors involved would be quite justified in patting themselves on the back, in view of what has already been achieved. Indeed, I was surprised by the number of people who seem to be interested in the topic. As an indicator of increasing political interest in national recognition of German colonialism, the symbolic-political character of the symposium can hardly be overlooked, considering the presence of many representatives from the media and the subsequent press reviews. The topic of German colonialism no longer seems to be only a concern of postcolonial theorists from a variety of disciplines and postcolonial activists critical of racism. However, I had hoped for speculative and imaginary moments from the symposium, and thus the possibility of considering museums as multi-temporal spaces that not only orient themselves to their colonial past, and thereby their historical responsibility, but also face how they convey linear imaginations of time. Questions of historical justice must not only be oriented to the past, but also to historical injustice in the present, which, in my opinion, is also evident in the hegemony of the established Western legal tradition. As already explained above, the Western legal tradition does not provide for legal relations between indigenous groups and nation states, which makes the repatriation of colonial objects extremely difficult. Indeed, some of the existing conventions are not even legally applicable to the reclaimed objects. However, it is also a legal tradition in which it would still be possible to draw up international agreements, granting formerly colonized peoples a legal claim to the objects. Having suggested that this would require the consensus of all states involved in the process, which Schönberger currently considers unrealistic:

„International treaties could undoubtedly establish legal claims for sovereign states to reclaim cultural objects that were removed from their territory in colonial times. However, such treaties would require the consent of all states involved in the restitution process. At the present time, such a consensus is unlikely to arise” (Schönberger 2016: 46).

In view of current political developments at local, national, and international levels, such a statement is not particularly surprising. Still, I wonder, why not? What would be the political implications? Toward what would precedent be created? What would be the implications for a world organized as nation states, if legal categories such as citizenship, nation state, or property were decolonized? The contributions by Juneja and van Beurden in this blog also make clear that the debate on the role and function of museums cannot be confined to the colonial heritage of anthropological museums. Moreover, as multiple interwoven levels of debate unfold through the Humboldt Forum, the efficacy of colonial traces in the present become more evident. In the hope of obtaining multi-perspectival answers, questions remain: Is a decolonized legal system conceivable? What would a decolonized legal system look like, especially with regard to the conventions mentioned above, and specifically the German law on repatriation of cultural property?

Souad Zeineddine is a Marie Skłodowska-Curie Fellow at the a.r.t.e.s. Graduate School for the Humanities Cologne. As part of the a.r.t.e.s. EUmanities global programme, Souad Zeineddine is pursuing her doctorate from a decolonial perspective on questions of standardization, regulation, and infrastructure in relation to port infrastructures of Durban, South Africa. After completing her Master’s degree in Transcultural Studies (University of Bremen), she received a transitional scholarship from the Collaborative Research Initiative, Worlds of Contradiction, at the University of Bremen. Furthermore, she remains associated with the WoC network initiative and the Bremen NatureCultures Lab.

[1] The heraldic pillar combines three stories and narratives. In the 15th century, during Portuguese expansion efforts, the pillar served as a mark of Portuguese claims to power. In 1486, the pillar in question was erected on the coast of present-day Namibia. In 1893, over the course of German colonization of present-day Namibia, Gottlieb Becker shipped the pillar to the imperial naval port in Kiel. It is now being reclaimed by the Namibian government (see also Buchwald 2018).